Note: This story was in November 2016 awarded a Silver AAAS Kavli Award for Science Journalism in the category large newspaper. Here is the release. 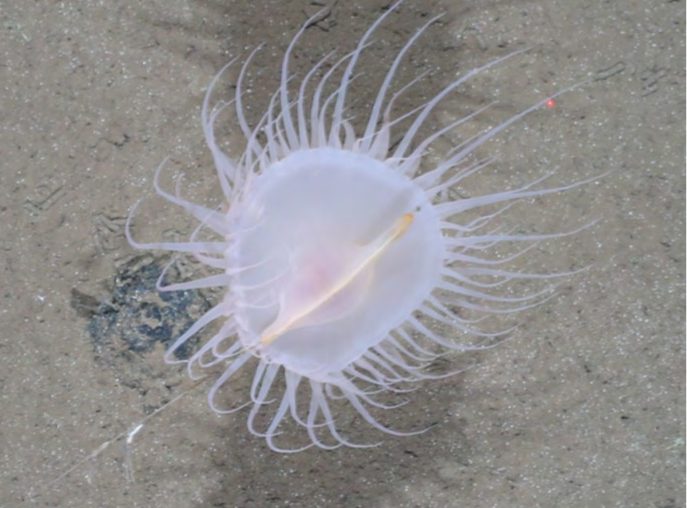 An unknown species of sea anemone clings to a dead stalk four kilometers below the sea.
The picture was taken by scientists at the Sonne Expedition 242/2 in summer of 2015.
Credit: portal-forschungsschiffe.de

26 years ago scientists ploughed the seafloor off Ecuador to study the possible effects of deep sea mining. A fresh look at the site shows: Life has barely recovered

In the summer of 2015 the brand new German research vessel „Sonne“ (Sun) left Guayaquil in Ecuador on a westerly course. Its destination was a patch of open water in the Pacific ocean.
7 degrees 4 minutes south, 88 degrees 28 minutes west, nothing but waves all around. What set this position in the Peru basin apart lay four kilometers below the keel: a plot of ten square kilometers of sea floor that German scientists had ploughed 1989 and monitored for a few years. The project called Discol remains unique until today. It was started to find out what deep sea mining would do to the fragile ecosystem of the dark abyss.

When the researchers aboard the RV Sonne reached the spot a little south of the equator on July 30 the site had gone unobserved for twenty years. Now robots sank into the depths, mapped the scarred ground, pierced the darkness with their spotlights, took samples and sent pictures and video to the surface. „Basically it looked just like it did in 1996“, says Gerd Schriever of the research company Biolab. Back then he led several expeditions as principal investigator, this time he came along as an advisor. „The resettlement had only just begun 20 years ago and on first glance nothing much has happened since. The plough lines are as visible now as they were then.“

The scars in the ocean floor were a familiar sight for Ante Boetius as well. The marine biologist had taken data for her Diplomarbeit (comparable to a Master thesis) on one of the expeditions in 1990s. Now she is a professor working at the Alfred-Wegener- Institute in Bremerhaven and the Max-Planck-Institute for marine microbiology in Bremen. She headed one of the two Sonne-expeditions to the Peru basin last summer. And she, too, marveled at the lack of progress. „Where the ground was raked up back then, some species haven’t returned in 26 years. Not even bacteria have managed to fully recolonize the plough lines.“ After all, ocean floor
4150 meters down is a nutrient- poor, cold and gloomy high-pressure environment. And something else hit Boetius right away. Where the plough had thrown up lighter colored sediments from 20 centimeters below ground those traces were also still visible. „Why hasn’t that darkened?“, Boetius asked herself.

There are many such unanswered questions about the deep ocean. Looking for explanations researchers find themselves in a race with industry. Deep sea mining is considered as a way to become more independent of metal imports by resource-poor industrial states like Germany, Japan or South Korea. Island nations of the southern seas like Tonga or Nauru see it as their route to prosperity. And the big exporters of minerals, nations like China and Russia, are also interested because the market prices for commodities are rising.

Manganese nodules especially fascinate expert. The metal lumps the size of potatoes get their name from a metal sought by steel mills. While there is lots of manganese left in mines on land the nodules also contain copper, cobalt and nickel as well as traces of rare elements like tellurium and molybdenum. Vast amounts of the lumps lie on the ground of the Clarion-Clipperton-Zone (CCZ) which stretches west thousands of kilometers from the Pacific coast of Mexico. The ocean there is between four and five kilometers deep.

The area is administered by the International Seabed Authority in Kingston/Jamaica which has given out 13 exploratory licenses to nations and groups of companies.

For Germany the Bundesanstalt für Geowissenschaften und Rohstoffe (BGR) in Hannover has registered a claim of 75 000 square kilometers which is more than Bavaria’s area. The agency doesn’t expect that commercial mining could start within the next five years. But it takes the further prospects rather seriously. Already plans are drawn up for a gigantic collector vehicle to harvest the nodules from the seafloor. The federal Ministry of Economics has assigned a study to calculate the costs of a pilot venture. And „Sonne“, commissioned only half a year before, spent a full five months in 2015 to study deep sea mining and its possible consequences. It was in the CCZ from mid March to mid June and spent August and September hovering over the Discol-site in the Peru basin.

No wonder there is all this activity: a huge amount of money is at stake. The estimated value of the metal in the two most interesting parts of the German licensed territory alone amounts to
9 billion euros by today’s prices.

To explore the possible German deep sea mines off Mexico Carsten Rühlemann went there seven times already; the next expedition is slated for April. „We want to select an area for a test to assess the consequences of the mining for the environment. And at the same time study it in such detail that everything is set for a future operation.“ For that purpose Rühlemann and his colleagues are collecting not only manganese nodules but also all the organisms that live on or in the ground.

The area hasn’t been spared human interference completely. In 1978 an US-company drew streaks into the sea floor using a sort of Caterpillar’s shovel. It extracted metal lumps together with about four centimeters of sediments. When scientists looked at the site in 2004 they found significantly less sea worms and a reduced biodiversity compared to undisturbed ground.

Still, the German Discol-project of 1989 remains the largest such experiment by far and the only one outside the CCZ. Back then the scientists deployed an eight meter wide rake and dragged it across the seafloor in a criss-cross pattern to plough about a fifth of the area. The manganese nodules remained in the ground but were displaced or buried. Kicked-up sediments resettled on otherwise untouched parts. „To have a full scale simulation of mining you would not only have to withdraw the nodules but also pump the tailings from initial processing back down. It would be a metallic sludge and would settle on huge areas”, says Antje Boetius. While that is decidedly a hazard for the organisms already the harvesting of the metal lumps presents problems. The nodules are the only solid spot some creatures can settle on. When pulled from the ground so much material hangs on them they resemble the root ball of a garden plant.

When the scientists aboard the RV Sonne looked through the robots’s cameras at the ground they first saw the obligatory plastic bags, beer bottles and coke cans. But soon the bigger animals became more interesting as they swam or crawled over the seafloor. They seemed to have had the best chances of returning. Many of them are surprisingly colorful given that they live in eternal darkness. Sea anemones wore orange, starfish pink, sea cucumbers came in green and spiky, purple and smooth-skinned or snow- white with tentacles. Then an off-white octopus captured the attention. The species has eggs the size of thumb nails and glues them to the stems of sea lilies. Then the parent loops its body around the brood and simply stays put. „They breed for four to six years and when the offspring hatches the parent animals dies”, Boetius says.

Much more isn’t known about the species. Only this: The octopus need the sea lilies for breeding which in turn need the nodules for support. Harvesting the metal lumps thus robs the selfless cephalopod of its niche. For reasons like these the Seafloor Administration in Jamaica has ordered there be untouched areas next to every mine. The creatures driven away are supposed to resettle the depleted grounds from such sanctuaries. But nobody knows how long that would take and whether it would work at all. „We can’t even define which functions exactly the seafloor needs to regain so we can talk about healing”, Boetius laments.

Forecasts about the environmental consequences of deep sea mining are also hindered by the fact that the ground in the Peru basin and the CCZ have different properties. „In our claim north of the equator the seafloor is rich in oxygen several meters down”, Carsten Rühlemann says. In the area the scientists of Boetius’s team looked at south of the equator oxygen only penetrates the first ten centimeters or so. If that ground is kicked up it might release dissolved metals into the water column; in the CCZ that danger to wildlife is probably not there.

Still, the metals might reach the food web by a different route. The mining operators foresee breaking up the nodules immediately after harvesting them so the fragments can be pumped to the surface in a stream of water. But that water would then be pressed back into the deep ocean taking metal dust with it. To study the effects that might have on sea creatures members of Boetius’s expedition performed an experiment. They put sea cucumbers into cages and sprinkled them with metallic mud. The animals tried to flee the assault.

„Judging by what we know I think deep sea mining will be justifiable”, Rühlemann says. „But there will have to be a public debate when the results of the environmental studies are presented.” Actually that debate has already started. NGOs like „Brot für the Welt” (comment: church-based, promoting development cooperation) oppose the resource extraction, the WWF emphasizes the risks, the German industrial council praises the chances. In summer of 2015 a group of researchers demanded in a comment in the journal Science that effective measures to protect the deep ocean from commercial usage be adopted quickly.

Antje Boetius seconds their request. „Why don’t we redirect the investments to improve recycling of metals on land?”, she asks. „Then we win a few decades to better understand the communities of the deep oceans and develop protective arrangements.” Maybe even the ploughed fields in the Peru basin will show clear signs of recovery by then.