you ask in your blog post why climate scientists can’t come up with good ways to convince skeptics that climate change is indeed a problem. 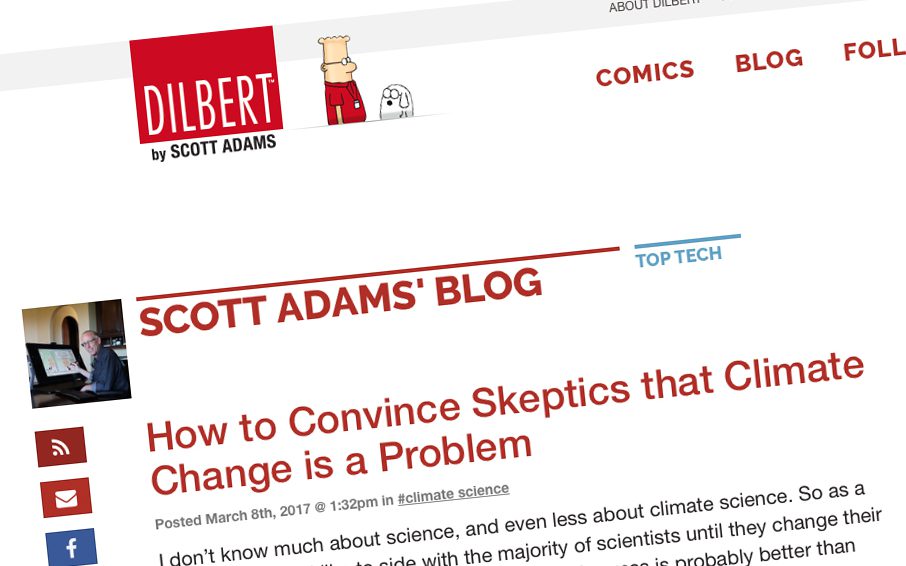 Just a screenshot (and a link). All rights lie with Scott Adams.

This might not be the answer you have been waiting for, but it is the answer I need to give. Let me introduce myself: I am a German science journalist, named Chris Schrader. I live in Hamburg. I am only writing this up because in the end of the post you say you’re interested in the psychology, not the science around the climate issue. So am I, that’s why I am bothering with this, but I do also know enough about the science, having worked as a journalist in the field for 15 years. And I am, this is the last of the preliminaries, assuming you have a genuine interest in the question and are, as you say, “on the side of the scientists”. I realize there is some debate about your motives in a related post but let’s go with the benefit of the doubt.

The simple answer to the question in the headline of your post is: There is no way to convince skeptics because they don’t want to be convinced. Indeed their identity and social status often depends on not being convinced. You make it sound as though everybody secretly wanted to believe climate change is real and a serious problem but just needs the right arguments to bring him- or herself to it. Or in a more neutral way of putting it: that everybody weighed the pros and cons in a rational matter and just needed enough good statements by scientists for the scales to come down on the right side. That is a concept the psychology around the issue debunked years ago: the information deficit model. It simply doesn’t work that way. More or better put information will not sway people’s views on contested topics. So if you propose to know  “what it would take to convince skeptics that climate science is a problem that we must fix”, as you say, I seriously beg to differ. This whole discussion is not about what science says or how it says it, it’s only about what people think they want to hear. You yourself seem to making the same point in the last two sentences but draw no conclusions from it.

Saying or thinking that science has to do anything at all before we finally can begin acting on climate change is nothing but a big smoke screen.

Especially on issues like climate change that are political and divisive, people tend to follow the hints in their social groups on what to think. Climate change is the prime example of that, especially in your country. It has become part of the political identity of people what they think about it. You should read up what researchers like Dan Kahan at Yale have to say on it. He does these tests that check peoples’ skills with numbers. When the subject is, say, the efficacy of a skin ointment in removing a rash and the task is comparing outcomes in subjects using it or not, people do okay. It’s a hard problem, but there are reasonable folks coming up with reasonable answers. But change the subject to climate change, or for that matter gun laws, and every evidence for numeracy people have goes out the window. Now they give the answer that falls on their political party’s line no matter the numbers. And the smarter they are and the better with numbers, the bigger the political spread becomes.

This situation is the result of a lot of hard work by some guys at conservative think tanks and other organisations. Read Naomi Oreskes’ book “The Merchants of Doubt” or see the documentary and you’ll get their names. Some of them had been falcons in the cold war, staunch missile-loving anti-communists, who then went on to defend the tobacco industry against the science saying smoking was really bad for you, defend the asbestos industry against science pointing to the risk of lung cancer the fibers posed, and so on: Acid rain, ozone hole, finally climate change, always on the side of industry against science based arguments supporting regulation.

The tactic was in every case an attack on the science and scientists, and spreading doubt was usually enough, hence Oreskes’ book title. They would say: the science is still out, there is no consensus, graphs hint at different explanations – sound familiar? The strategy was to defend the coveted American liberties against overreaching government or what these guys saw as it. They seemed to believe that if the state were allowed to regulate x then it would soon also want to deal with y and z and other letters. x in this instance being carbon emissions, y maybe cars,
z houses, and somewhere down the road gun control, health insurance and other concepts that are toxic and socialist in the view of the American right (and, just as an aside, that even rather conservative states in Europe have no problem with at all).

So these guys certainly didn’t and don’t want to be convinced climate change is a real problem. Maybe they really believe this theory about giving the state not a single ledge to step on, maybe they were and are also paid well by the industries making a profit in an underregulated business. And as long as they have a hold on their share of public opinion through political contacts, religious leaders, talk radio, TV stations like the Fox News network and bloggers they keep selling opposition to the science of climate change as an identity badge for millions of people in the country. So they don’t want to be convinced, either.

That also seriously deflates calling them skeptics. Skepticsm is a virtue in science but there you need enough of a background to voice specific objections and you have to be willing to let yourself be convinced your views are wrong. We could relax the first point to make this not into an elitist issue but the second is fundamental. And we have just seen there is no disposition by that group to be dissuaded of their criticsm. 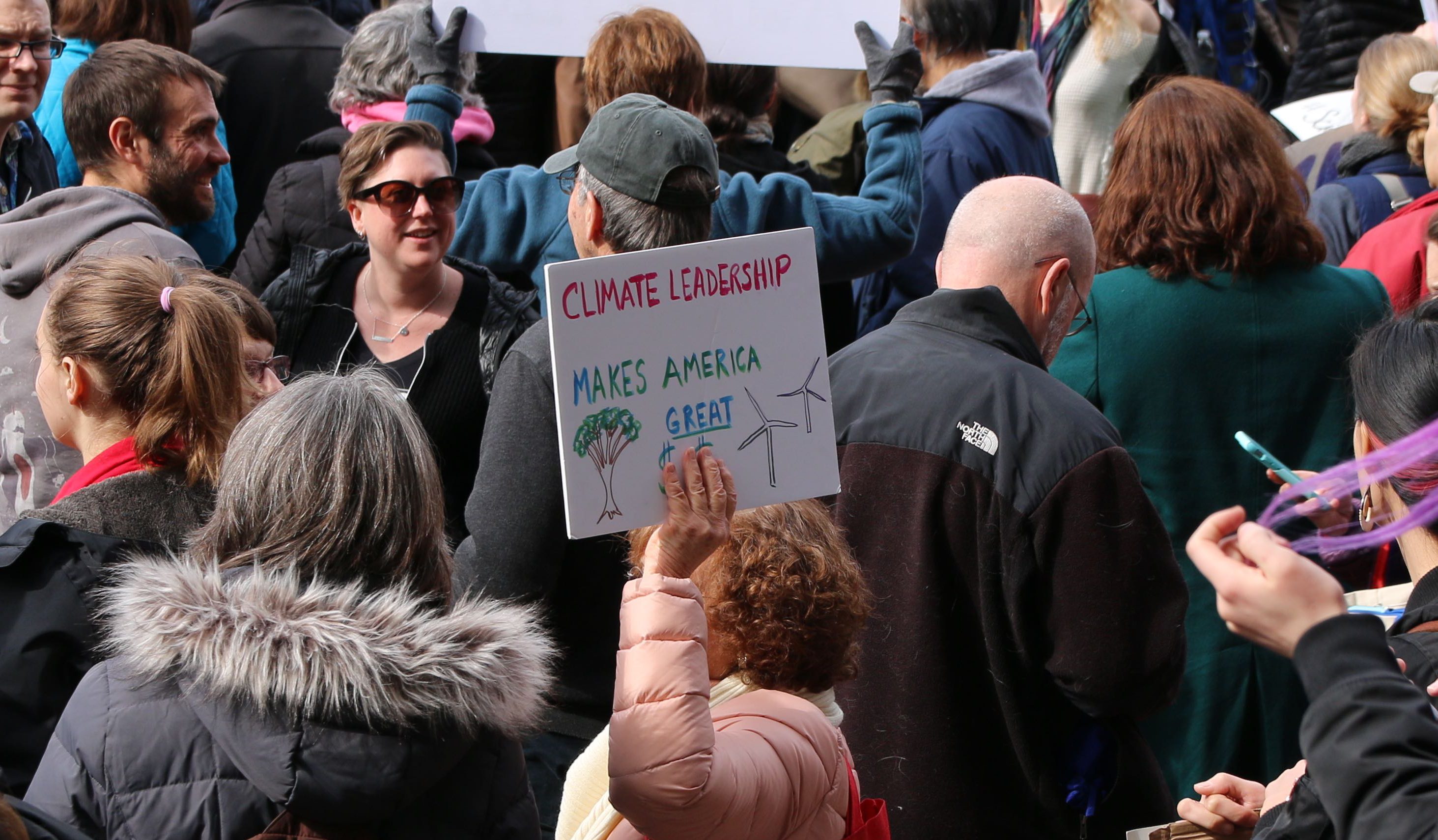 One of the many signs held up at the February rally in Boston „Stand up for science“. It rightly says that acting on climate can be patriotic. Copyright: C. Schrader

If you take the psychology serious, and there is lots of research showing this, in order to “convince” the “skeptics” you need to embrace social strategies to get people out of the strangleholds they are in. Show them, demonstrate to them how it can be patriotic and christian to be concerned about climate change and that their neighbors, colleagues and friends think that way, too. Get them hooked on Katharine Hayhoe’s Global Weirding series of short videos: She is an evangelical climate scientists with credentials in both supposedly mutually exclusive communities. Even Trump voters don’t want him to dismantle the US climate change policy. They just don’t talk about it, because they think they are a minority. Well, they aren’t and they need to shown by someone they trust. If that’s you: welcome, get to work. Their political conviction is certainly valued. The questions we have to answer need everyone’s ideas, but it should come in at the stage where we discuss the solutions, not whether the problem is real.

Maybe then that only leaves you, Scott Adams: Do you want to be convinced? I mean, there must be some people willing and able to weigh arguments around climate change. Open mind to the question, good common sense, no patience for b/s but respect for clear arguments, willing to admit to change of opinion. It has been sort of the ideal of the western culture since enlightenment. Let’s assume you are, and further assume your questions or demands have anything to do with that. If that is correct, you show yourself as a guy with a no-nonsense-attitude that will not mind coming across gruff. Then presumably you will be able to handle a similar tone. So here goes: I think you are basically misunderstanding and misrepresenting what science is and does and supposedly owes you to a point that makes it hard to presume that all this happens in good faith.

For specialists: Some answers to Adams‘ questions/demands.